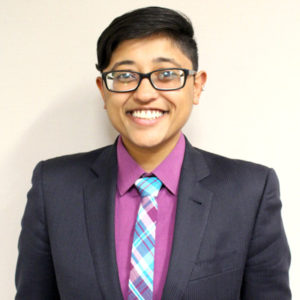 Stuti (Stu) Desai earned her B.A. in Sociology at the University of California, Los Angeles and her J.D. at Benjamin N. Cardozo School of Law. Ms. Desai was admitted to practice law in New York in 2013. She is a current member of the South Asian Bar Association and the New York State Bar Association. During law school, Ms. Desai worked with the Brooklyn Family Defense Project, where she assisted attorneys defending parents in child neglect cases in child protective proceedings. After being awarded the 2011 SABANY Public Interest Fellowship, she worked with My Sisters’ Place in White Plains, NY where she represented domestic violence victims in child custody, visitation, and support proceedings both in Family Court and the Integrated Domestic Violence Court.

In addition to creative cooking and visiting her family in her hometown in Southern California, Ms. Desai enjoys working with youth. During her law school years, she founded a chapter of Mentoring Youth Through Legal Education (M.Y.L.E.) which sought to pair high school students with law student mentors for debate preparation. In 2014, she spent two months at the Gandhi Ashram in Ahemdabad, Gujarat teaching outdoor classes to the children of the Ramapir No Tekro slum community. Ms. Desai is proficient in Gujarati, Hindi, and French