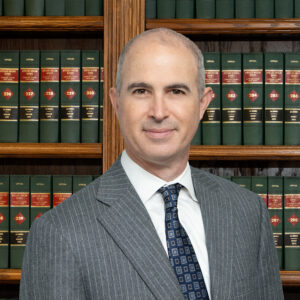 Robert Grey is a graduate of the Johns Hopkins University, B.A. 1987 and St. John’s University School of Law, J.D. 1990.  He is presently the managing partner of Grey & Grey, L.L.P., which represents workers in the areas of workers’ compensation, Social Security Disability, personal injury, Long Term Disability, and other matters involving injury and disability.  The firm has offices throughout the metropolitan area.

Robert has represented thousands of clients before the Workers’ Compensation Board, tried cases in State and Federal Court, and prosecuted appeals in State and Federal courts including the New York State Court of Appeals.  He has also been involved in drafting legislation to provide workers’ compensation and pension benefits for World Trade Center rescue, recovery and clean-up workers.

Robert has published many articles on workers’ compensation issues which have appeared in legal journals, the New York Law Journal, and the New York Times, among others.  In 2008 he was the honoree of the Transport Workers Union Local 100 Widows & Orphans Fund.